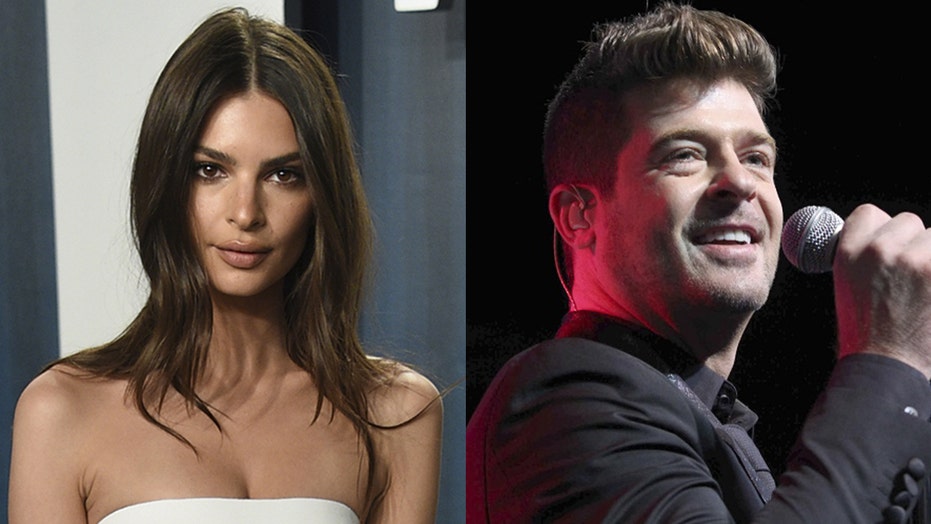 According to the Sunday Times of London, model and actress Emily Ratajkowski claim in her new book that she was grabbed by singer Robin Thicke in 2013 while shooting the popular song Blurred Lines.
Ratajkowski says in her forthcoming book, “My Body,” which will be released on November 9 that Thicke touched her naked breasts during the music video’s shooting.
“Suddenly, out of nowhere, I felt the coldness and foreignness of a stranger’s hands caressing my naked breasts from behind,” she wrote, the Times said. “I immediately backed away, my gaze returning to Robin Thicke.”

“He staggered backward, his eyes hidden beneath his sunglasses. My gaze shifted to the void beyond the set.” According to the model, the director, Diane Martel, called out to her, “Are you all right?”
The video was directed by Diane Martel, who confirmed Ratajkowski’s claims to the New York Times. “I recall him grabbing her breasts,” she told the Times. “Each in its hand. He stood behind her, both of them in profile.”
Ratajkowski said, “I pulled my chin forward and shrugged, avoiding eye contact and felt the fire of shame pulse through my body.” “I did not respond – at least not in the way that I should have.”

Martel told the Times that the singer was intoxicated and apologized after the encounter. She explained to the publication that she had taken steps to ensure ladies felt at ease on set.
“Robin apologized shyly,” Martel writes. “As though he knew it was bad but had no idea how it felt for Emily.”
Ratajkowski had not previously discussed the event but was reminded of it years later when she saw Thicke had banned her on Instagram.

The 30-year-old model’s book will include pieces that document critical events in her life while delving into “feminism, sexuality, and power, men’s treatment of women and women’s rationalizations for tolerating such treatment,” according to the publisher’s description.
Thicke has yet to react publicly to Ratajkowski’s accusations. CBS News has sought out a comment to his reps.